This was the video that went viral a couple weeks ago and had everyone feeling all warm and fuzzy around Veterans Day! 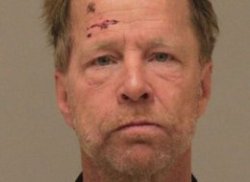 This is our hero after he was arrested on Sunday.  Looks like life isnt all sunshine and rainbows after the camera stops rolling.

Source – A homeless U.S. Army vet who became a viral sensation thanks to a video showing him getting a makeover has been arrested.  James Wolf, 54, was arrested Sunday at a Burger King in Grand Rapids, Mich., and charged with trespassing and creating a disturbance.  Wolf pleaded guilty to both misdemeanor charges on Monday and was ordered to serve 10 days in jail on each charge, MLive.com reported.  Wolf told WOOD-TV on Wednesday that he appreciated the efforts of Dégagé Ministries, the organization that used his makeover as a fundraising tool, but admitted he’s gone back to drinking.  Grand Rapids Police have arrested Wolf more than 80 times and he has suffered from alcoholism, substance abuse and mental illness in the past.  The video showing Wolf getting a complete makeover was released around Veterans Day and has received more than 14 million views in just a few weeks and helped raise more than $30,000 for Dégagé.  Rob Bliss, the man who made the video, hoped it would set Wolf down a new, more positive path, but admitted changing a lifestyle is harder than a hairstyle.

Listen Im not going to knock this guy, alcoholism is a serious problem and he obviously has a serious problem with it.  But instead of just giving the guy a suit and a haircut how about using some of that money raised to get him some real psychological help and teach some usable skills.

Rob Bliss, the man who made the video, hoped it would set Wolf down a new, more positive path, but admitted changing a lifestyle is harder than a hairstyle.

No kidding, cant put lipstick on a pig and call it a beauty queen.