In short, I trust the ACC more than I trust Gonzaga.

Was gone for a minute but now Im back.  And honestly still in shock that Philly won the Super Bowl, but I digress.

March Madness is here and everyone knows what that means….BRACKETS!

Here is mine, yes I have UNC repeating.  Call me crazy, but when they are on they can beat anybody, and they have experience at the guard position which is crucial this time of year.  And this just seems like the type of year where Izzo will have one of those Izzo type runs.

First things first, congrats to the Tar Heels and to Roy Williams.  Only thing that matters is who wins at the end and they came out on top and are now the champions.

That said, last night’s championship game was one of the ugliest title games I can remember in recent memory.  Shooting.Bad. Free Throws. Bad. Refs. Bad. Fouls. A Ton.

Carolina is a team that likes to get out and run, and the Zags can put the ball in the hoop at high volumes as well so it made sense to expect a track meet and a high scoring game.  That did not happen Monday night.

People will, and did, complain about the refs and deservedly so, they were pretty bad in many spots.  But there was more too it than that, poor shooting all around, poor free throw shooting as well, it was a mess.  Maybe defense had a part in that, maybe it was the huge football stadium they played in, either way it was ugly.

On the positive side, props to Roy Williams, this makes it 3 national titles for him which puts him in legendary company.  Lets not, for a moment, think about the fact that the NCAA may take away one if not two of those titles and just enjoy the moment.  This was not Roy’s most talented team by any means, which makes this win so much sweeter, because this might be his best coaching job to date. 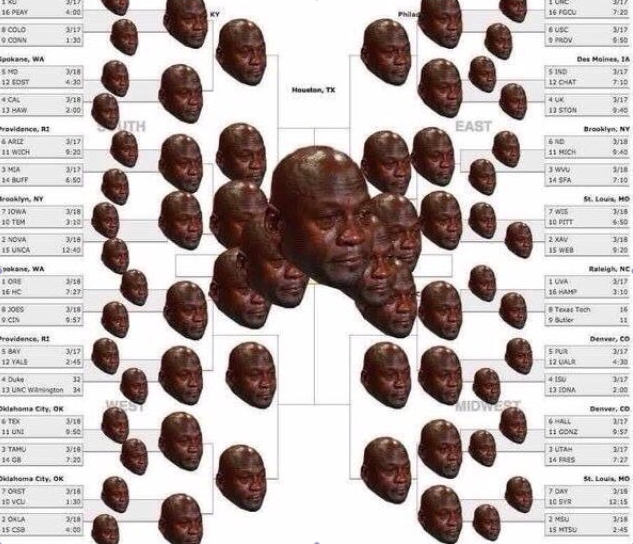 So much for all that Izzo magic in March. 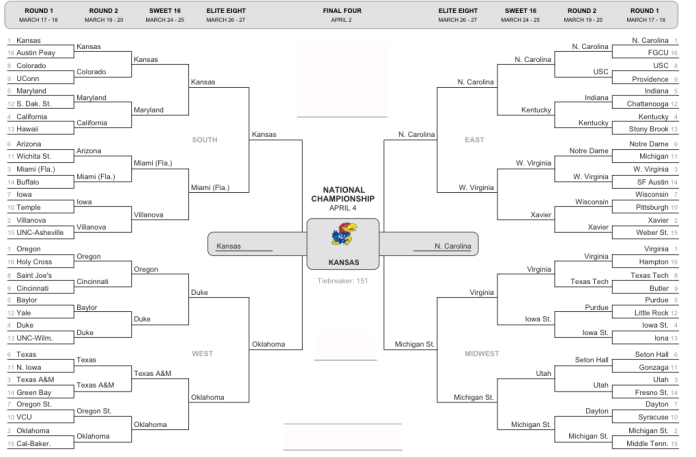 Been on vacation for the last week, but Im back just in time to show you the only bracket you will need for this March Madness season.

Ya Ya, I know what you are thinking.  Oh Kansas over UNC in the finals, way to go out on a limb.  To that I say…sometimes chalk is the correct answer.  In this case Rock Chalk Jayhawk if you know what I mean.

Just think these are the two most well rounded teams.  Besides everyone knows your bracket is made or busted in the first weekend.  No worse feeling than losing a Final 4 team on the first day.

Here is the official Tales From The Sideline Bracket.

Ya ya I know, way to go out on a limb and pick Kentucky to win it all.  In the end I just couldnt find a reason to pick against them.

Plus everyone knows you dont win your bracket pool on the championship, its the games chosen leading up to that where the real winners and losers are made.